In Freefall: A Divine Comedy, Lily Iona MacKenzie zeroes in on a fundamental truth: We’re all in freefall, and that’s the real divine comedy. No matter how old we are, we’re still trying to “find ourselves” and discover what we want out of life.
Meet Lily Iona MacKenzie, a new member this season, at the November 17th meeting, opening for Joan Gelfland.
Lily writes:

I don’t have hayseed clinging to my trousers, but growing up on a Canadian farm gave me a unique foundation as a writer. I sprouted under cumulous clouds that bloomed everywhere in Alberta’s big sky. They were my first creative writing instructors, scudding across the heavenly blue, constantly changing shape: one minute an elephant, bruised and brooding. The next morphing into a rabbit or a castle. These billowing masses gave me a unique view of life on earth.
I continue to seek instruction from clouds. Just as they provide the earth with much-needed water, I believe that stories have a similar function, preparing the mind to receive new ideas. Also, conditions inside a cloud are not static—water droplets are constantly forming and re-evaporating. Stories, too, change, depending on who is reading them, each one giving life to its readers.
A high school dropout, and a mother at 17, in my early years, I supported myself as a stock girl in the Hudson’s Bay Company, as a long distance operator for the former Alberta Government Telephones, and as a secretary (Bechtel Corp sponsored me into the States). I also was a cocktail waitress at the Fairmont Hotel in San Francisco; briefly broke into the male-dominated world of the docks as a longshoreman (I was the first woman to work on the SF docks and almost got my legs broken); founded and managed a homeless shelter in Marin County; co-created The Story Shoppe, a weekly radio program for children that aired on KTIM in Marin; and eventually earned two Master’s degrees (one in Creative writing and one in the Humanities). I have published reviews, interviews, short fiction, poetry, travel pieces, essays, and memoir in over 160 American and Canadian venues. Fling!, one of my novels, was published in July 2015 by Pen-L Publishing. Curva Peligrosa, another novel, was published in September 2017. Freefall: A Divine Comedy was released in January 2019. Tillie: Portrait of a Canadian Girl in Training, featuring the same main character as in Freefall, will come out in 2020. My poetry collection All This was published in 2011. I also taught writing at the University of San Francisco (USF) for over 30 years and was vice-president of USF’s part-time faculty union. I currently teach creative writing at USF’s Fromm Institute for Lifelong Learning. When not writing, I paint and travel with my husband.

Lily answers a few questions about her writing, and then gives advice to writers! 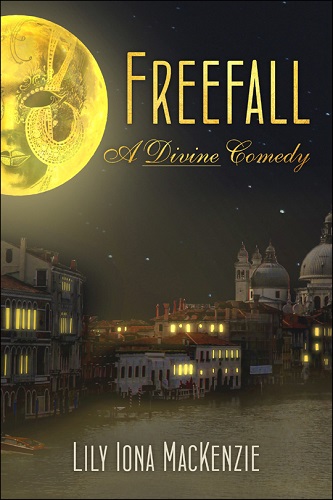 An enchanting story about old friends reuniting as they struggle with thoughts on aging, religion, motherhood, men, art, and death, with plenty of surprises and laughs along the way. A Divine Comedy, indeed!

Freefall’s subtitle is A Divine Comedy. Dante’s epic poem of that same name also involves lots of travelling, and lots of soul-searching. Dante’s poem, however, has three parts: The Inferno, Purgatorio, and Paradiso. Did you see the four women in your novel as going through a similar time sequence, reaching a kind of paradise at the end of a hellish journey? Or did you mean to suggest a different process?
I actually wasn’t thinking about Dante’s poem when I wrote this novel. The title came to me much later, and then I realized the narrative was a kind of divine comedy, though I wasn’t trying to imitate Dante’s excellent work. To me it’s Divine because I believe that all life on earth is divine, and the comedy part Isn’t comic in the slapstick sense but in the humor that’s implicit in being human. We all face different challenges in our lives. If we’re lucky, we can see through the darkness to the wry aspect of how little control we have over anything.
But the characters in Freefall, as those in Dante’s work, do travel, and they also do a fair amount of soul searching. And while they don’t reach a kind of paradise at the novel’s end, they have come to a new understanding of themselves and each other.
“Tillie Bloom,” the main character’s name, is similar to Molly Bloom in James Joyce’s Ulysses. Was that intentional? Tillie certainly “blooms” in other ways throughout the novel. Did you choose this striking name purposely?
Yes, I deliberately chose Bloom as Tillie’s last name. Tillie renames herself “Bloom” after reading Ulysses. She didn’t want her previous husband’s name, and she doesn’t have a father. So, she chose Bloom because he lives so much in his senses. And just as Bloom is searching for a son, Tillie is searching for a father.
Freefall has more than a touch of magical realism in it. Is this a style you use in your other books? What attracts you to this style of writing?
Reality is both magical and “real,” if by real we mean something that isn’t imagined. Language by its very nature is magical, transforming our everyday reality in multiple ways, carrying us aloft on the wings of thought. When I call on magical realism in my fiction, I do it because it opens me up to a fuller understanding of our world, both internally and externally. I believe it captures a fuller view of what’s going on in our lives than realism can do.
You describe writing as “your addiction” and “compulsion,” but your website also features several of your watercolor paintings. Then, too, Tillie herself is an artist. Is visual art also a passion of yours? What does painting allow you to do that writing doesn’t, and vice versa?
If I could reincarnate, it would be BOTH as a visual and literary artist. What I produce when I’m playing with water color or acrylics or oils is not unlike what happens when I write poetry or prose. I start out with no expectations, no plan, and I follow wherever the unconscious leads me. I never know where I’ll end up, and that’s much of the pleasure for me in creating, whether as a visual artist or as a writer. In each case, I’m open to what I’ll discover and what will discover me. I’m passionate about art, and museums are my temples.
In addition to writing yourself, you also teach and coach writing. What are the advantages of working with a private teacher/editor versus taking a class or joining a critique group?
In a class, at least how I teach it, students receive responses from multiple viewpoints (other class members), though they usually aren’t professional/trained writers. Therefore, the feedback can be uneven, and the writer needs to weigh each comment and decide for herself which ones seem to offer an opening into her work.
With a private teacher, you hope that s/he will be able to accommodate many different approaches to writing poetry/prose so s/he can offer a wide range of possibilities in his/her critiques. Otherwise, there’s a danger that the teacher/editor will abort whatever in the person as a writer is trying to bloom.
You have another novel about Tillie in the works. Will we be hearing more about Tillie and her re-found friends as they reach their seventies and beyond? Or just more about Tillie?
The follow up to Freefall that I’m currently working on and will be published in 2010 doesn’t involve an older Tillie but a much younger one. Yet your question makes me wonder if I need to consider writing a novel that follows these women into their seventies and beyond!
Tillie: Portraits of a Canadian Girl in Training is a Bildungsroman that takes the reader back to the ‘50s, to a world that flashes green and red lights at women. This novel starts with three-year-old Tillie and follows her until she’s seventeen and struggling to find her place in the world

Where are you in your writing career? Aspiring? Published?

I’ve published reviews, interviews, short fiction, poetry, travel pieces, and essays in over 160 American and Canadian venues. All This, a poetry collection, was published in 2011, and a poetry chapbook (No More Kings) will come out later this year. My novel Fling! was released in July 2015. Curva Peligrosa, another novel, was brought out in 2017. A third novel, Freefall: A Divine Comedy, was published on January 1, 2019.

How long have you been part of CWC, and what does membership mean to you?

I just joined this past spring, and I’m looking forward to sharing the writing journey with other committed writers. We need to help each other find the appropriate paths that will connect us with our best readers!

What other things would you like people to know about you – writings, passions, etc?

I grew up on a Canadian farm that taught me how dependent the natural world and the animals that inhabit it are on we humans, and vice versa. While I’m not a backpacker or even a camper, I do have a passion for nature. I also love art in all of its forms: music, visual, etc. I’m always uplifted by great art! And I enjoy eating well!

How do you manage your writing life?

I think it’s the reverse! It manages me, since it’s as important to me as eating. Over the years, I’ve had to find ways to fit writing into my days. I’ve discovered that if I only commit to an hour a day religiously, I can produce a tremendous amount of material, as my publications indicate.

Please send a link to something people can read of yours!

My blog is a gateway to lots of samples: https://lilyionamackenzie.com

PLEASE PLAN TO PURCHASE A RAFFLE TICKET! Only $1 each or 6 for $5, every ticket supports the club’s equity program. You can win a book written by our club authors!
* Support groups are members-only but guests may audit
* Empty pockets? Ask about our sponsored guest program at the door. We are writers helping writers, a welcoming community.

Our meetings are right off 980 in downtown Oakland, at beautiful Preservation Park. Just off 12th Street, naturally you can get there from the 12th St. BART station. Those with limited ability can use the parking lot off of MLK Way; otherwise there should be plenty of FREE parking within the park and on surrounding streets.

SAVE THE DATES!
Our Forthcoming Events:

Check for support groups and more member events on our Calendar.

is open to the public
Third Sundays
on ZOOM