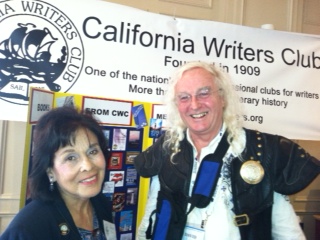 with member Davie Simmons at the San Francisco Writers Conference

Kathleen Orosco has been an an active and interested member since 2009, and at last we get to hear some of her writing! She has a very special message for members of the Club.

My children Elizabeth Rose and Natalie Anne are no doubt the most important to me in my life, but guess who is next?  Yes, CWC Berkeley—the dedication of its members and their participation has meant a lot to me in ways that can’t be completely described. I keep all of you in my best thoughts so your writing will be successful! I am grateful that you are here and that you represent the quality of happiness that the world is searching for in their lives.

Kathleen will be speaking before our Featured Guest Speaker, Chris Hennessey, on November  20

Not everyone knows about the tragedy Kathleen suffered, one that is difficult to imagine unless you have been through it yourself.

My father was murdered when I was 18 years old, and I had to take care of my mother and brothers and sisters. Houston police let the killer go because he was an informant, and thirty years later a judge found him guilty, but he still got away for the same reason.  Through this tragedy, our family’s love was hurt, and our togetherness was distanced. I pray for a positive outcome and only good words can make that happen.

Kathleen has been working on a book about a special American, who was at the center of  a national tragedy.

I had the privilege and opportunity to see the Kennedys speak the night before John was assassinated November 21, 1963 at the Rice Hotel in Houston, Texas, and was enthralled by Mrs. Jacqueline Kennedy, who gave a 15 minute speech in Spanish.  She played a major role in President John Kennedy’s career many times that Americans do not realize or know about.  It is my intent to give her the acknowledgement that she deserves in my forthcoming book, Why President Kennedy Went to Texas.

Kathleen, who has worked in television and education, gives this advice to other writers:

Listening, reading, and practicing writing does make perfect! And don’t let negativity influence how you feel.

Kathleen Orosco at the first CWC Booth at SFWC

About the CWC Member Spotlight:

Each month before our Speaker Series we give the mic to a club member for 15 minutes of fame to tell their story, do a reading, and answer questions. Are you ready for the Member Spotlight? Contact vp.berkeley.cwc@gmail.com to apply!

is open to the public
Third Sundays
on ZOOM